Mediation, a form of alternate dispute resolution (ADR), is a process in which a neutral person, the mediator, helps two or more disputing parties communicate with one another to promote reconciliation, reach a settlement, or reach a mutual understanding between all disputants. In private mediation, the mediator has no authority to make a decision, and his or her sole responsibility is to find a position that all disputing parties can accept as a satisfactory resolution to their differences by using patience, persistence, stamina & optimism. Some of the advantages of mediation include:

In construction mediation, having a mediator with field experience on construction issues helps the process proceed with equity, accuracy, and expertise. In addition to having more than 40 years of construction experience, Mr. Charles has received extensive dispute mediation and arbitration training from the American Arbitration Association (AAA). The ADR training Mr. Charles has received, along with examples of ADR matters he has handled, is noted below.

Litigation is not always the most effective means of dispute resolution. In comparison to litigation, properly conducted arbitration can prove to be more expedient, less costly, and more confidential. For the construction industry, arbitration also offers the benefit of allowing an impartial party appointed arbitrator with experience in the subject matter to handle the dispute rather than someone with limited knowledge of the issues.

Upon completion of arbitration, the arbitrator(s) render(s) a final and binding decision called an “award” which, with very few exceptions, can be enforced similar to a court’s judgment without the chance of appeal. This offers a highly satisfactory and “final” resolution to the parties in a dispute. 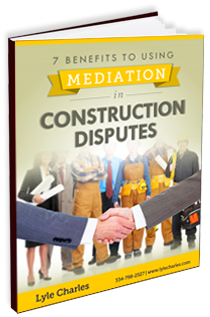 Since 1967, Lyle Charles has been involved with the construction industry in a variety of roles. From his 18-year tenure with Joe Brashears Steel to his 25-year history of owning and managing major subcontracting companies to his 20+ years
DOWNLOAD E-BOOK